Last year, the people making income claims were put on notice after The Successor received a number of complaints about a few high-profile leaders sending private messages, making public posts and even running ads with outrageous claims.

Rather than publicly naming and shaming these individuals, they were given an opportunity to clean up their act.  They were told both directly and indirectly that if they continued to put our industry at risk, they would be exposed and any evidence would be forwarded to the proper authorities.

The individuals in question stopped making illegal claims…. until they thought the watchdog wasn’t looking any longer.  How silly.

No more warnings…. you’re being exposed!

Before we get to the names… let’s quickly review what the FTC considers an illegal income claim.  Here’s a quote directly from the FTC.gov website:

“The FTC Act prohibits unfair or deceptive advertising in any medium. That is, advertising must tell the truth and not mislead consumers. A claim can be misleading if relevant information is left out or if the claim implies something that’s not true.”

When people send screenshots of their back office that shows income or they send photos of checks – the FTC considers this an overt income claim!  Pictures of video of you standing in front of a large house or fancy car while talking about your business opportunity can also be considered an income claim.

Numerous companies have been fined and even shut down over illegal income and product claims.  When a big company is shut down, it wipes out the income of everyone involved.  That’s why The Successor takes this problem so seriously.

Now that you have an understanding of the problem, it’s time to expose the repeat offenders.

Romacio Fulcher
We received complaints regarding Romacio more than a year ago when he produced a video featuring himself standing in front of and driving several exotic luxury cars while talking about his income and free cars he was getting from the company.

Apparently the fancy cars weren’t enough to keep him at the company, so arlier this year, he joined a new company… and the income claims he’s making are over the top.  After receiving complaints that included evidence of the claims, it became apparent that our warning wasn’t heeded. 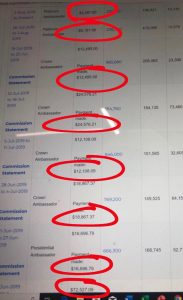 Jenna Zwagil
Here we have another flagrant offender has been pushing the boundaries on a number of legal fronts.  Not only is she posting income claims on social media, her company has been caught illegally shipping CBD oil internationally.  HempWorx has been the target of numerous investigations for operating outside of the law.  It’s only a matter of time before things escalate. 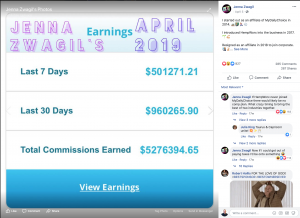 Robert Hollis
Another well-known leader at HempWorx was running ads on Facebook that set the context for others to make ridiculous income claims.  The video ad featured Robert in his Rolls Royce pulling stacks of $10,000 in cash from every part of his car and claiming “I don’t do hype.” After stacking up $60,000 and asking you to “imagine” making this kind of money each month, he invites you to join his business.

You can see the video for yourself here:  https://youtu.be/wzRyKCN7Xig

This is a prime example of the kind of thing that the FTC is looking for.  If there was ever a leader in the industry who knows better than to post these kinds of videos – it’s Robert.

If you SEE something… SAY something!

The reason we’re aware of these people are because of Watchdogs who report it to us.  If you’re aware of other leaders making inappropriate or illegal claims – let us know.  Send us an email at: TheMLMwatchdog at gmail.