It’s unclear what Policies & Procedures FutureNet had in place prior to these accusations but they have since posted their rules in a recent Facebook post.

For those who don’t understand what crossline recruiting is, this is a term that describes the practice of being a distributor for a company and enrolling people who you didn’t personally sponsor into a totally different company.  Another way to describe this practice is “stealing people” from another downline.

Although Conley vehemently denies any wrongdoing, he has been posting thinly veiled threats on Facebook and claiming CEO Giles Whiting has been sabotaging and terminating other leaders.  Any time a leader is being threatened with termination for an alleged violation of policies and procedures, it’s common for both sides to accuse one another of wrongdoing.  As of this post, we have not seen any evidence that supports claims on either side. 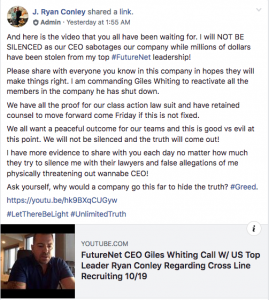 This story brings up an important issue that needs to be addressed.  First off, the practice of recruiting people into other companies isn’t new.  It’s been going on as long as I can remember.

While The Successor opposes the violation of fair policies and prodecures, it’s also important to point out that attempting to regulate morality is an effort in futility.  The fact is, network marketing is a relationship-based business and these relationships aren’t limited to those people someone has personally enrolled.

Quite often, people who were friends before they joined a company will wind up being enrolled by different people for various reasons.  If, at some point, people that are in different organizations decide to join a new company together, the proper way to handle this is resigning their positions with the company they were previously building.

The MLMWatchdog will be keeping an eye on this story and updating it as it unfolds.